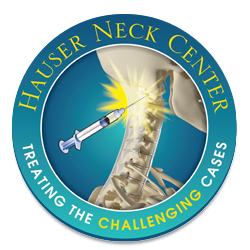 Everyone knows the frustration of a clogged toilet and the immediate need of a plunger. What if your brain could not drain properly? What if the waste products from all the brain neuron activity (yes, neuron poop!) started to back up and could not get out of the brain? What would happen to your brain cells? How would you feel? While most people understand that there are arteries (vertebral and carotid) that supply the brain with blood, oxygen, and nutrients, few are aware that there is an intricate network of lymphatic cells and veins to drain the brain. Obstruction of the venous output of the brain has been coined Chronic Cerebrospinal Venous Insufficiency (CCSVI), which we simply call Brain Toilet Obstruction (BTO). While the condition is very serious, there are easy non-invasive ways (e.g., high-resolution ultrasound) to diagnose it.

There is a massive price our brains pay for our modern facedown lifestyle, with its constant visual stimulation and multitasking, or switching from one internet visual stimulus to another: the blood supply cannot match the brain neuron metabolic demands, and the brain drainage system is unable to remove all the toxic waste products produced. In other words, the brain’s waste clearance system gets overloaded, much like portable toilets during large events like marathons and festivals. You don’t like smelly backed-up toilets at events, in the airports, or even in your own home. So, imagine if that was your brain!

When you run, the blood supply to the muscles needs to keep sufficient oxygen present, otherwise, they cramp. Then, as the exercise demand increases, the body has to remove the lactic acid from the muscles, or the muscles start cramping again. To continue to function optimally, tissues of the body need an adequate energy supply to meet the tissues’ metabolic demands, and equally as important, as a means to dispose of waste products. Because of cell phones and computers, the metabolic demands on the human brain are thousands, if not millions of times more than in previous generations, and unfortunately, the blood supply in and the drainage pipes out are not keeping up. The reason they are not keeping up is because of cervical dysstructure from cervical ligament damage and resultant instability.

The brain contains one billion neurons or nerve cells. For these nerve cells to be healthy, fluid has to flow into and out of the brain appropriately. The main fluid in the brain is the cerebrospinal fluid (CSF) that cushions the brain, but it is also critical to ensuring the right distribution of substances between the various cells of the body, and it allows the removal of waste products from the brain through the brain’s lymphatic system. Metabolic waste products from the neurons diffuse rapidly into the CSF (about 150 ml of fluid, 2/3 of a cup) and are removed into the brain’s lymphatic system (it is now called the “glymphatic system”), and eventually into the veins such as the vertebral and inferior vena cava. Cerebrospinal fluid flow is driven by net blood flow into and out of the brain. If the blood flow in or out is stopped or slowed for any reason, cerebrospinal fluid flow will also be slowed. This slowing can have many detrimental effects as the pressure inside the brain cavity (cranium) increases and the brain’s ability to remove toxic metabolites decreases.

For the brain to have good health, the blood supply and drainage must meet the demand of its metabolic activity. The areas of the brain of extreme importance, those that involve intelligence and problem solving, such as the anterior cingulate cortex and front lobe cortex, have the highest metabolic demands and are very susceptible to injury by a clogged brain toilet! When these vital areas of the brain become injured, the first noticeable symptom will often be brain fatigue or brain fog, and if the brain toilet is not unclogged, will progress to extreme lethargy, emotional numbing, dissociation, severe depression, and hopelessness. Even if the brain toilet obstruction is low-level, if it goes on for too long, it will cause the slow but progressive destruction of brain tissue and brain neurons. As more brain tissue is lost (front lobe atrophy, for example) a person’s mental capacity and emotional well-being continue to decline. We have personally seen many young people in their 20s that would appear to have Alzheimer’s dementia if one were just to do an intelligence or memory test on them. That is how bad it can get. With the resolution of their cervical instability and cervical dysstructure, which caused their clogged brain toilet, their intellect, emotional stability, and mental capacities return.

At Caring Medical, there are many ways that we document components of the brain toilet:

While the human brain comprises a small fraction (<5%) of the body’s total weight, it consumes 20+% of the body’s total oxygen uptake (metabolism).1 This is because of the high metabolic rate of neurons. Brain neurons are especially susceptible to toxins and oxygen deprivation. Even a brief loss of blood supply (intermittent compression of key vessels for seconds) can cause cellular changes, which if not quickly reversed, can lead to neuron cell death. The ultimate massive neuronal cell death is a stroke, or cerebral ischemia, but brain tissue can also succumb to a slow death by increases in intracranial pressure, venous hypertension, and toxic accumulation of metabolites such as hemosiderin, amyloid, and a host of other toxins implicated in conditions such as multiple sclerosis, Parkinson’s Disease, and Alzheimer’s dementia.4,5The blood-brain barrier prevents toxins from entering the brain, but it can’t save the brain from being bathed in toxins that are self-generated from its own high metabolism and don’t drain out fast enough!

The bilateral internal carotid arteries end in the brain to form the middle and anterior cerebral arteries, which supply blood to the most anterior portion of the brain cerebrum (forebrain, anterior three-fifths of the cerebrum), as well as to the thalamus, basal ganglia, and internal capsule. The posterior part of the brain is supplied by the vertebrobasilar arteries to supply the posterior two-fifths of the cerebrum, most of the cerebellum, and brainstem. The drainage of the brain through the venous system goes from 614-740 ml/min. in the supine position to 280-304 ml/min. while upright.2,3 In the supine position, 75-92% of the venous flow goes through the internal jugular veins but goes down to 25-42% as the venous flow shifts more to the epidural, vertebral, and deep cervical veins while upright.2.3 Obstruction of venous blood flow from the brain has been implicated as a cause for conditions such as exertional headache, primary intracranial hypertension, global amnesia, dementia, and a host of neurodegenerative conditions.6,7 In one study, 133 out of 363 (37%) had greater than 50% narrowing of the cross-sectional area of the internal jugular vein at all levels.8 In 36% of the patients with narrowing, it occurred at the C1 level. Almost all of the areas of narrowing greater than 50% occurred above the C4 level (upper cervical). In another study looking at cases of moderate (>50%) and severe (>80%) stenosis of the internal jugular vein based on external compression, the most common causes of this were the styloid process or posterior belly of the digastric muscle, often adjacent to the lateral mass of C1.9 It is clear from the many vascular scans that are done at Caring Medical (motion arterial and venous obstruction mapping), that the key area of compression of the arteries and veins into the neck occurs at or around the C1 vertebrae.

The main danger of brain venous congestion is that it increases intracranial pressure, this pressure is then transmitted to the brain’s arteries, which then increase blood flow to ensure adequate oxygenation of the brain.10 If the blood vessels cannot respond because of their obstruction in the neck, then of course brain ischemia ensues. The brain’s blood vessels may initially be able to respond via autoregulation (increases in blood vessel diameter in the brain) for a time, but if the cervical/brain venous congestion continues because of cervical dysstructure and cervical instability, the increased intracranial pressure will eventually damage the brain neurons, and ultimately, the brain tissue itself.

While the most common cause of arterial or venous obstruction in patients seen at Caring Medical is narrowing caused by cervical dysstructure or cervical instability, it can also be from autonomic nervous dysfunction. Autonomic nervous dysfunction or dysautonomia can cause detrimental changes in the arterial blood flow to the brain or venous blood flow out.11,12,13 When the sympathetic nervous system goes unchecked because the parasympathetic vagal system is compromised, arterial and venous blood flow can be slowed and compromised.

One of the more common symptoms of cervical instability (especially upper cervical instability) is brain fog. This symptom can be described as forgetfulness, cloudy thinking, spaciness, mental fatigue, exhaustion, difficulty processing words read, confusion, detachment, numbness (or numb emotions), and difficulty focusing, thinking, and communicating. About 90% of people with brain fog state that it impairs schoolwork, work productivity, and social activities.14 Some of the patients actually come to Caring Medical with central lines in place because they receive intravenous saline to keep their blood pressures up because of postural orthostatic tachycardia syndrome (POTS) and see improvements in their brain fog with the added salt and water in their systems. While brain fog is worse with standing, it usually never goes away, even with lying down. The most plausible explanation for brain fog, especially in people with symptoms compatible with low vagal tone or dysautonomia, is a clogged-up brain toilet from cervical dysstructure and instability. It is common in our office to see a lifting of the brain fog after cervical stabilization with Prolotherapy and correction of the cervical dysstructure with Prolotherapy, exercises, and cervical curve correction.

One of the more interesting facts about how the brain clears its “poop,” or metabolic waste products, is that it does so primarily when we are sleeping on our side or back.15,16 Cerebrospinal fluid flow is greatest during the night when asleep, so the main effects of sleep are removal of toxic metabolites from the brain, restoration of the brain’s energy supply, and memory consolidation (insight, creativity, and problem-solving). This is why a “cat nap” or natural sleep is so refreshing. One of the effects of insomnia or inadequate restorative sleep is that brain poop accumulates. Most people with cervical instability cannot sleep well because of the pain. By resolving chronic neck pain and headaches, Prolotherapy allows people a more restful sleep, and the side benefit of it just may be a good brain toilet flush!

4Prasansuklab A, Tencomnao T. Amyloidosis in Alzheimer’s Disease: The toxicity of amyloid beta, mechanisms of its accumulation and implications of medicinal plants for therapy.  Review Article. Evidence Based Complimentary and Alternative Medicine. 2013; http://dx.doi.org/10.1155/2013/413808.

8Buch K, Groller R. Variability in the cross-=sectional area and narrowing of the internal jugular vein in patients without multiple sclerosis.  AJR. 2016;207;5:1082-1086.

Find out if you are a good neck candidate 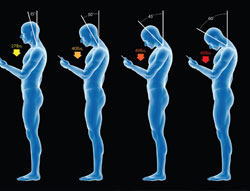 Text Neck epidemic from smartphone use 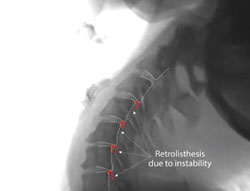 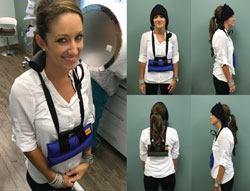 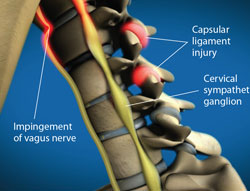 SEARCH
for your symptoms